–
Scene 1: Health, safety, and welfare of the physical and social body
– 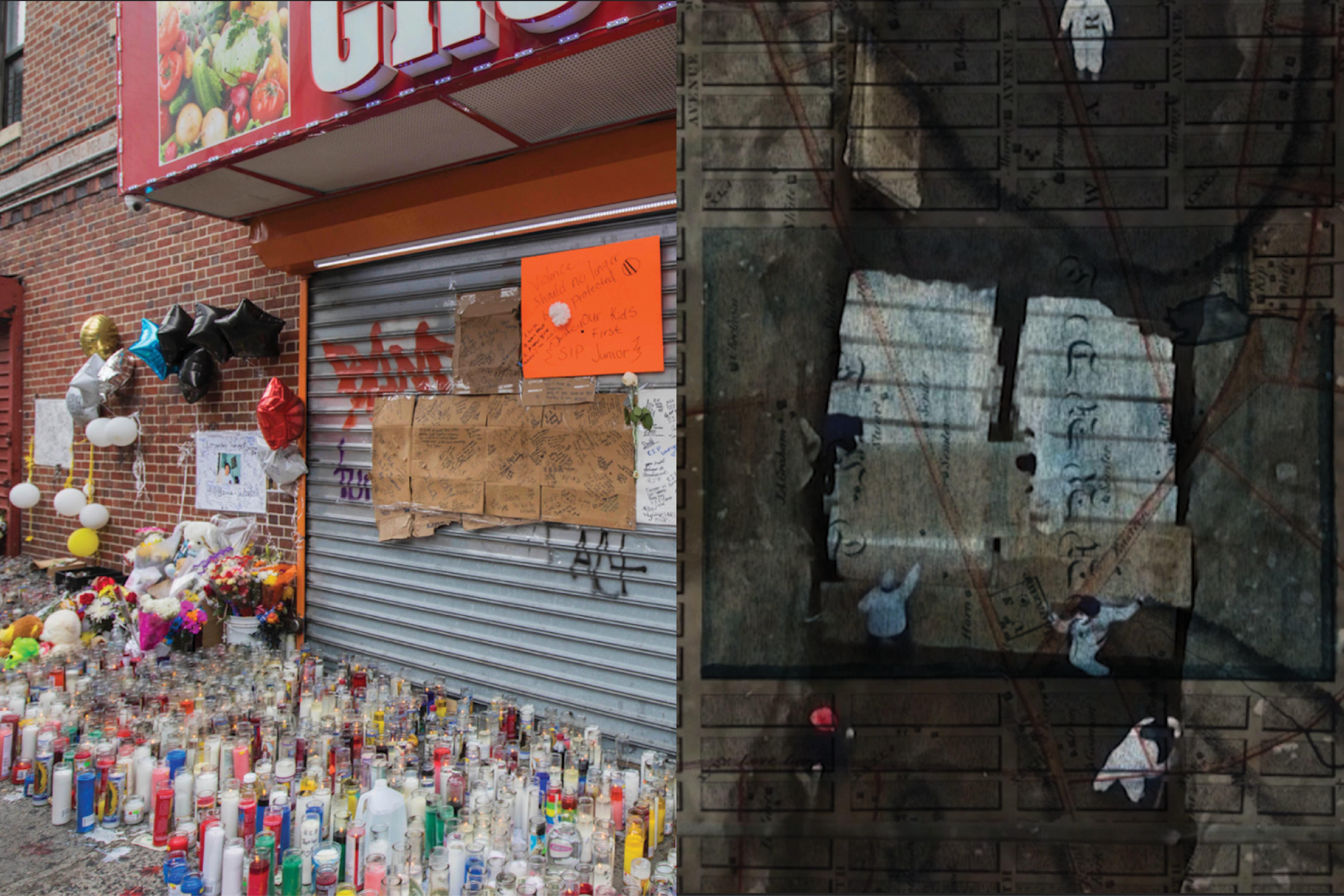 Left: A memorial outside a bodega. Right: Burials of bodies lost to COVID on Hart Island.

The health, safety, and welfare of the physical and social body is requires maintenance at every stage of life, even after death.
Children are contending with overwhelming death due to the pandemic.

"What does it mean to defend the dead?" asks Christina Sharpe.

....It means work. It is work: hard emotional, physical, and intellectual work that demands vigilant attendance to the needs of the dying...and also to the needs of the living....How might we stay in the wake with...those whom the state positions to die ungrievable deaths and live lives meant to be unlivable?"
Christina Sharpe, In the Wake 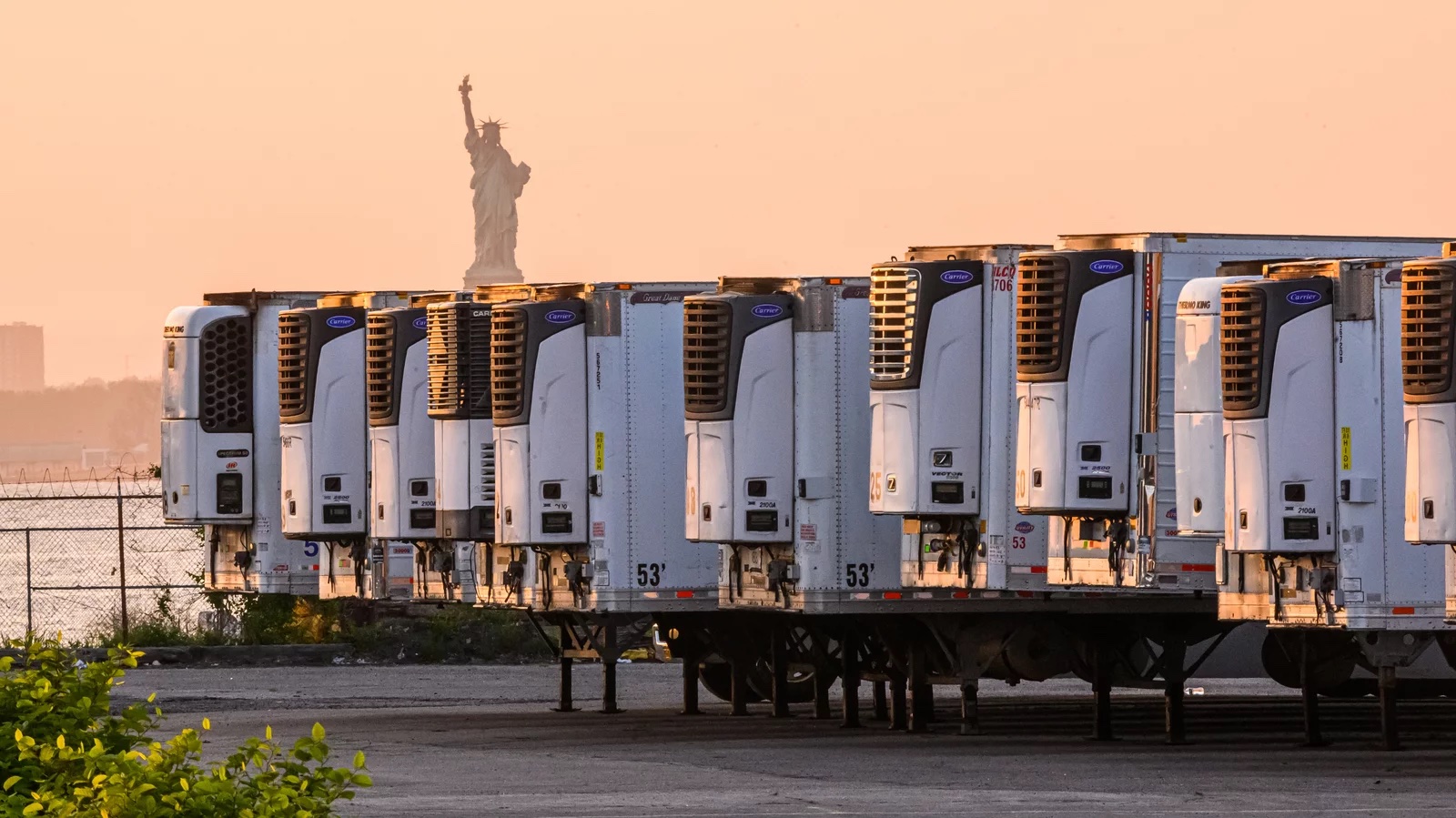 Refrigerated trucks set up as a disaster morgue in Sunset Park due to COVID-19.

COVID-19 has had an outsized impact in Sunset Park, revealing systemic injustice.

The South Brooklyn Marine Terminal was used in 2020 as a site for a disaster morgue, where bodies were preserved in refrigerated trucks until morgues had the capacity to attend to them. This may preserve the physical body, but the social body remains, as Sharpe clearly revealed, "ungrievable." They were lives treated as already dead, while at the same time so many in this community were labeled "essential." 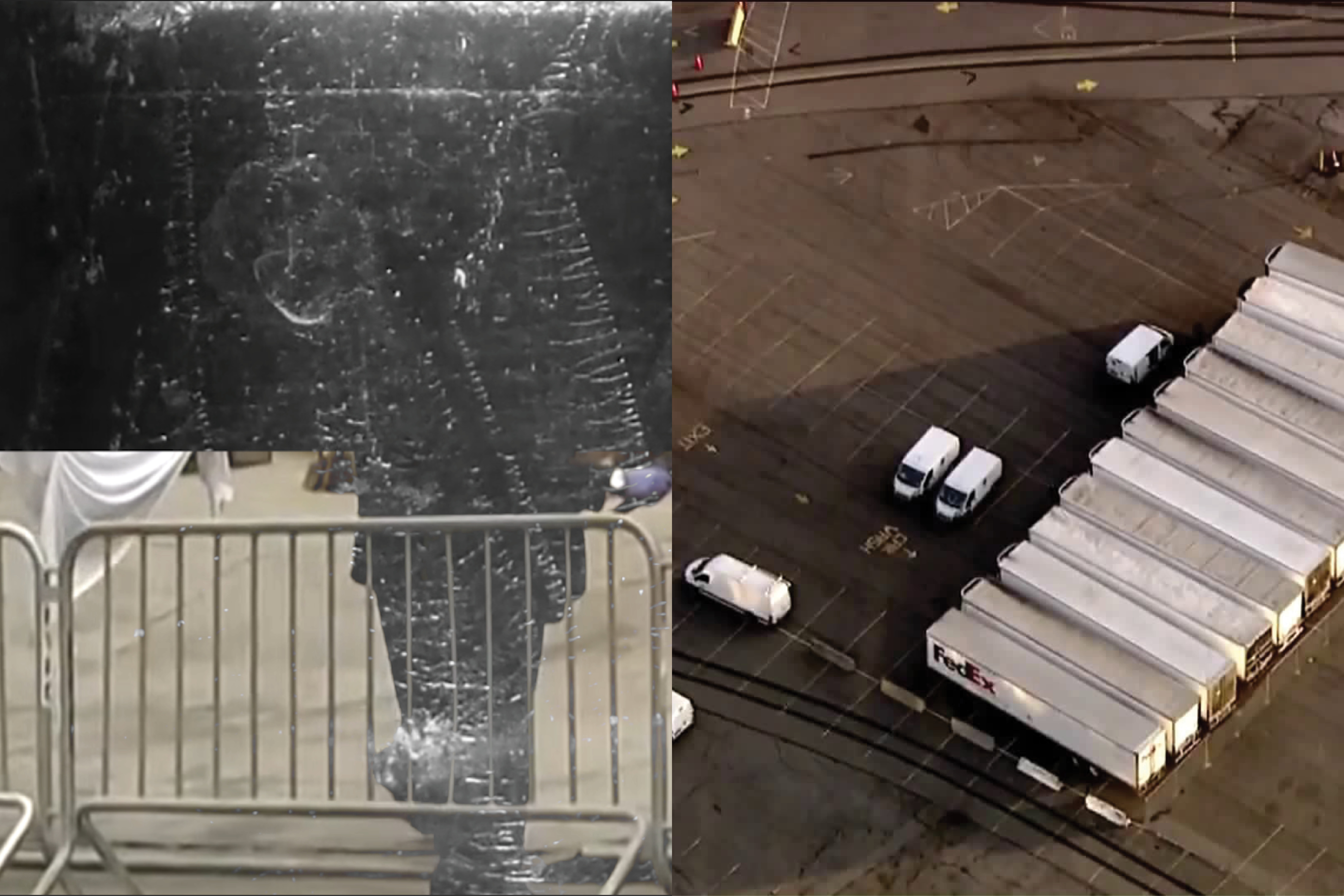 Left: A shrouded body is carried into a disaster morgue. Right: Disaster morgue in Sunset Park seen from above.

"These are questions of temporality, the longue durée," Sharpe continues.

"At stake, then, is to stay in this wake time toward inhabiting a blackened consciousness that would rupture the structural silences...that produce and facilitate Black social and physical death."

This "social and physical death" echos into many communities, such as those of Puerto Rican and Chinese Americans in Sunset Park, whose bodies are being violated by the failure of white supremacy, American exceptionalism, and capitalism to do the work of health, safety and welfare.

How can we cultivate care, as in Tempo 2, for the dead as well as the living?

We suggest that it is through active memorializing—not in a way that preserves and thus contains—but in a way that nourishes growth, imagination, and productive landscapes while attending to memory.

In short, we can cultivate care through the social practice of maintaining the process of decay. 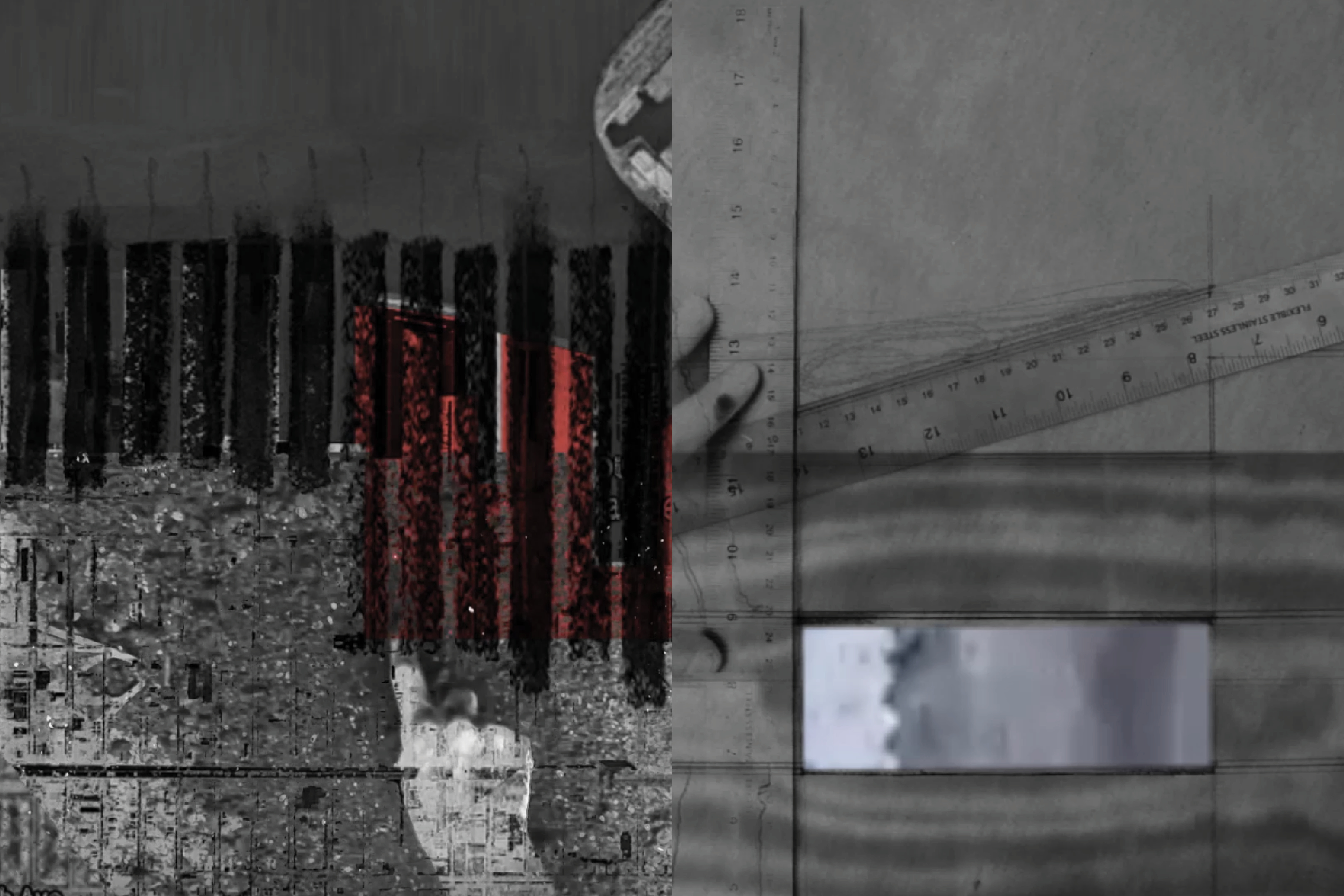 Decay, too, is both physical and social. Physical decay is wrought by rising sea level, eroding the violent ground we seek to disrupt. Social decay is the upheaval of the state positioning of bodies as logistical waste. We overturn this model through ritual and growth, particularly through agroecology.

Sketching a detail plan and section of the metal plate and its disruption of the water.

We imagine a disruption in the water at the South Brooklyn Marine Terminal. Returning to Christina Sharpe: "Wakes allow those among the living to mourn the passing of the dead through ritual...But wakes are also "the trace left on the water’s surface by a ship the disturbance caused by a body...in water." 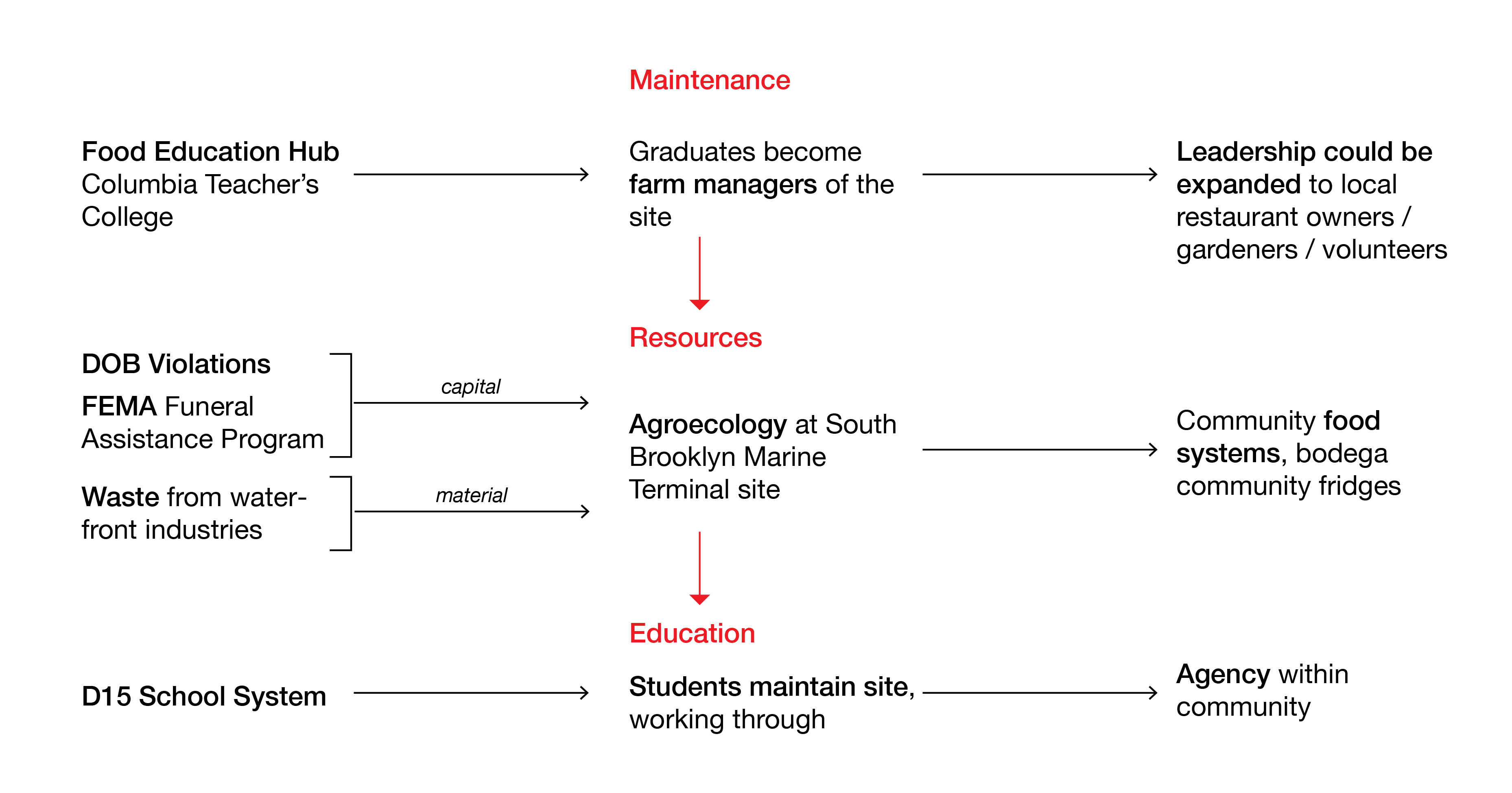 Diagram of agroecology and education model.

This disruption is both symbolic and active. By redirecting the flow of water through rotated metal plates, we can construct and amplify a new agroecological landscape. This landscape may plug back into the Sunset Park school system. Maintained by farm managers of existing community land trusts, it is a site for education through fellowship and food production. 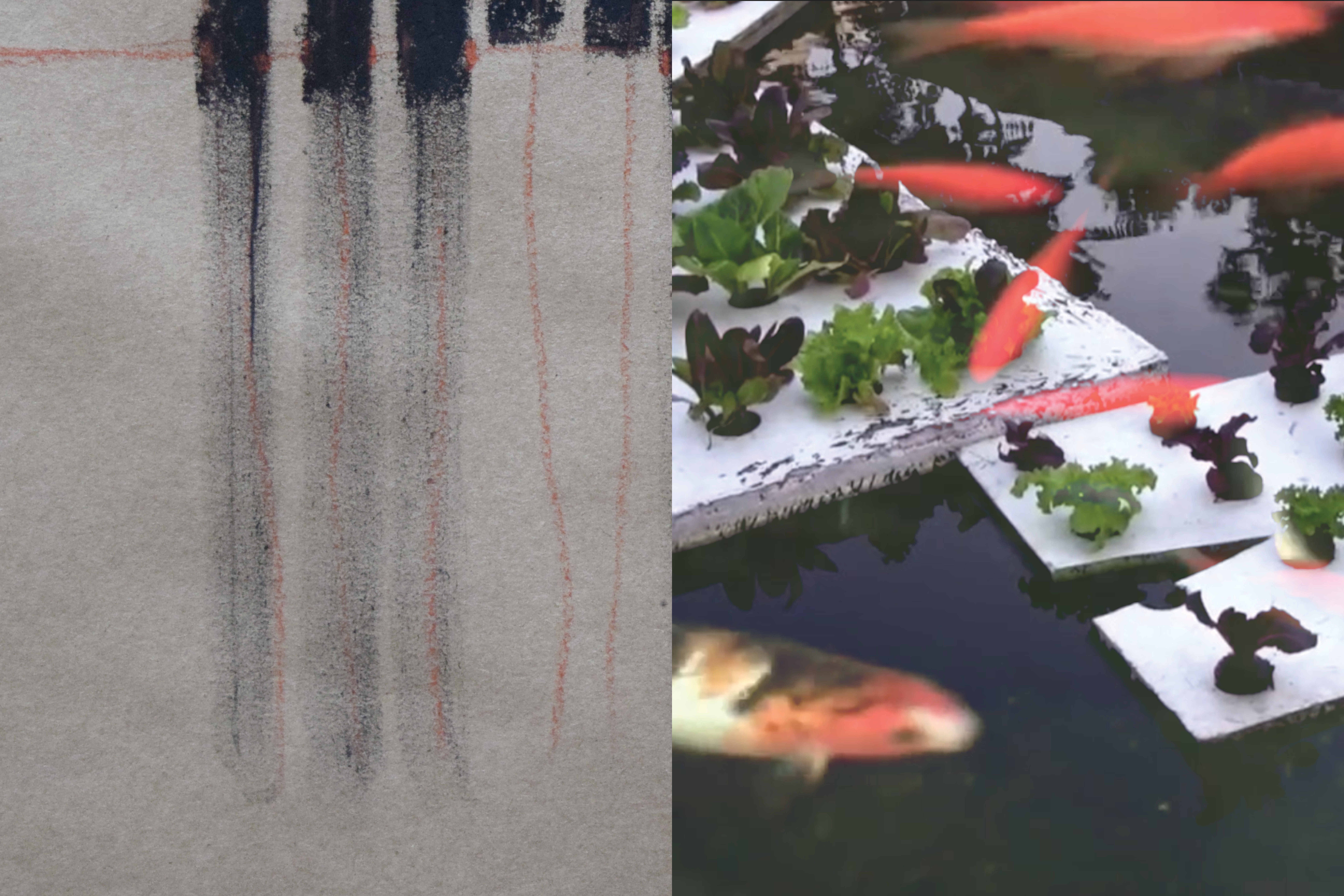 The educational and ritual use of the site is centered on agroecology.

This is a project that memorializes through unearthing the social body while carefully attending to imagination and growth.